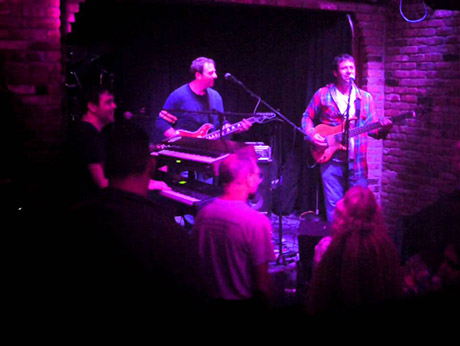 On April 2, Finley’s of Greene Street in Huntington, NY was treated to a performance by Long Island based band Cousin Fungus. The bar was packed and the dance floor full as Cousin Fungus took the stage after the cover band Run for Covers.

All the way in the back of the bar with an open overhead garage door, the stage set-up at Finley’s made it feel as though Cousin Fungus was performing in their own driveway. As the music started the crowd edged its way forward toward the long-time devotees already lining the front of the stage. The set list consisted of fan favorites Other People, Earth Turns, and Find Your Pipe along with unique jam style cover versions of the Traffic instrumental Glad and Grand Funk Railroad’s I’m Your Captain (Closer to Home.) The first song, Fanfare for the Common Man, was played in homage to the late Keith Emerson from the Emerson Lake and Palmer Band and two new original songs. Birthday was introduced following a special celebratory birthday shout-out to a fan and the show closed with their latest and greatest, Caravan.

Throughout the show heads bobbed and the dancing intensified with each crescendo. It was evident that the band was feeding off the effervescent energy of the crowd. Dennis sang with style as he passionately pounded the keys and Henry and Thomas grooved to the music flowing from their guitar and bass. Although Chris was hidden behind his drum kit at the back of the stage, his ever present and integral beats were “visible” during each and every song. The boys were in constant communication with each other as they flowed from song to song with smiles on their faces!

Customers come to Finley’s for fun and fellowship, and of course its large selection of craft beers. Cousin Fungus fans come from near and far to hear amazing music with great friends. This particular night the crowd got it all – Finley’s definitely delivered as promised! — Lauren Enzlah